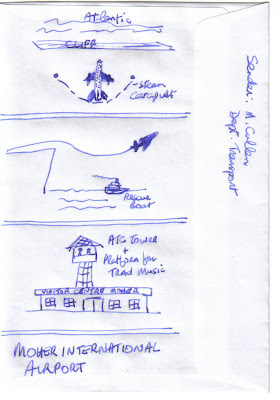 (A bit of recycling here, but appropriate given the topic, I hope).

There is a major omission from the Fianna Fail “Green Strategy” unveiled today, and I may be inadvertently responsible for that omission.

Rushing down Main St, Bray earlier this week, I bumped, literally, into Environment Minister Dick Roche who was rushing in the opposite direction. I noticed that he dropped something , but by the time I’d managed to pick it up and turn around, he’d vanished into the crowd on the street and I couldn’t locate him.

Subsequent examination of the document showed it to be a joint proposal from the Environment Minister and Transport Minister Martin Cullen to cut the pollution associated with air travel, a topic that is becoming popular with the media who, paradoxically, are probably among the worst offenders.

Background
The debate regarding emissions from air travel is hotting up, the latest development being the UK government imposition of a travel tax for all passengers. The phenomenal growth of low-cost carriers such as Ryanair and Easyjet has meant that such emissions are growing at an unprecedented pace, despite the introduction of more fuel-efficient aircraft. There are moves afoot for the EU to introduce similar measures on a Europe-wide basis.

In light of the open skies agreement between the EU and USA, ending the obligatory Shannon stopover for transatlantic flights and the threat to its historic economic benefits to the Mid-West Region, the Government needs to find a way to incentivise airlines to continue services to the region.

Aircraft burn a significant portion of their fuel load on take-off, and larger long-range aircraft with heavy fuel loads are particularly penalised in this way.

The Proposal
Move Shannon Airport to the Cliffs of Moher and, using a steam catapult system similar to that employed on aircraft carriers, launch aircraft off the cliff top and out over the Atlantic.

This should significantly reduce the amount of fuel burned in take-off with obvious benefits for associated emissions and operating costs. The new visitor centre would make a fine terminal building, while the car park is already big enough.

The US military have agreed, under strictest secrecy, to provide US navy equipment and qualified personnel to manage the launch and retrieval of commercial aircraft, subject to unrestricted access to the facility for their own unmarked aircraft.

The main challenge is the safety of aircraft landing on a much reduced airstrip. USN Special Adviser to the project, Rear Admiral Woody Bearschitz, is confident that his men can stop incoming aircraft short of the perimeter Liscannor-Doolin road and that the experience should not be too frightening for passengers: “About on a par with a standard Ryanair landing” was his assessment.

Attached is the detailed blueprint for the scheme. It’s on official stationery - trust me, there is a harp on the other side of the envelope. It has clearly received at least as much detailed consideration as many other major Government initiatives e.g. decentralisation.
Posted by mollox at 4:19 AM