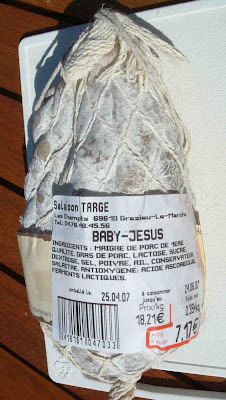 About a year ago I was watching an RTE fly-on-the-wall documentary about a variety of carers with their individual challenges and circumstances.

One situation was a single Cork man of about 60 who was looking after his physically disabled but reasonably mentally alert father. It was quite touching. but not without its moments of humour, some perhaps accidental.

In telling the story of the carer, the film-maker used a technique of having him talk to third parties about his father, rather than speaking direct to camera. One such scene had him in his local barbershop getting a haircut. The barber asks him questions about his father, including “and has he got a good appetite?”. “Oh yes”, replies the son, “he’d eat the hind leg of the Lamb of God”.
It was delivered and received in a completely deadpan way, suggesting that it’s a common expression in that part of Cork, though I’d never heard it before and thought it hilarious.

So when I saw this “Baby Jesus” saucisson on a recent visit to Paris, I had to buy it. I’d have bought more than one, but the wife was adamant that it would stink everything in the suitcase and I was lucky to get away with one. With the new security regulations, items such as this can’t be taken through in hand luggage.

I’m still on the lookout for a butcher brave enough to advertise “lamb of god”. I'll be stocking the freezer when I find one!
Posted by mollox at 7:10 AM