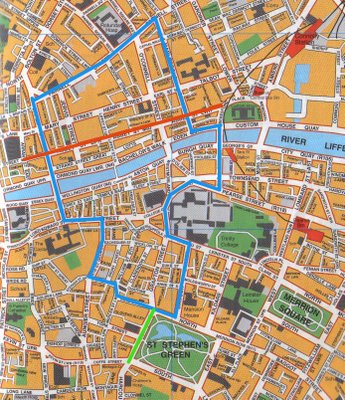 The transport plans for Dublin City include an extension of the Luas Green Line to O’Connell St, primarily to intersect with the Luas Red Line, facilitating the transfer of passengers from one line to the other.

In addition, the proposed Metro will run from St Stephen’s Green, via O’Connell St, out to the airport.

All Dublin’s major transport systems and routes - bus, DART, Luas, train, metro - both current and planned, radially converge in An Lar, the city centre. This is a relatively small area, a radius of a couple of hundred metres around O’Connell St.

One result of this is extraordinary traffic congestion in the city centre which, in turn, causes serious delay to the bus service, the major public transport service for the city.

Another consequence is that getting across the city in any circular direction is almost impossible using public transport.

An objective of planning and transport strategies should be to increase the size of that central city footprint to a wider “inner city“ area, reducing the concentration of traffic at the absolute centre and improving commutability across and around that inner city area.

The extension of the Green Line to the top of O’Connell St creates the risk that all south-bound trams at rush hour will be full by the time they arrive at the current Stephen’s Green Luas terminus.

Here’s an alternative proposal which is either brilliant or daft.

To achieve the desired Luas interconnection (and support other public transport interconnectivity - bus & dart), why not create a new circular line which serves the wider city centre - a new Luas Blue Circle Line. The attached map (click on map to enlarge) illustrates one possible route (see street details below).

The suggested way of running this is a single line, one-way (anti-clockwise would best fit with existing traffic flows), continuous loop service - which reduces the encroachment into existing road space, cost and time/disruption and allows for increased frequency with a smaller number of trams e.g. 4 trams could probably guarantee a service every 5 minutes. The trade-off is that it constrains the overall length of the line (illustrated example is approx. 3 miles long) - if it’s only going one-way, you need to keep the round-journey time to an acceptable limit - e.g. max 20 mins.

The main benefits of such a line would be to facilitate
(a) cross-city centre and inner city commuting, thereby reducing car traffic in the central area
(b) connecting with the Green Luas at Stephen's Green, crossing the Red Luas line in two places, connecting with DART at Tara St and numerous bus termini and routes.
(c) running a limited number of Green Line trams on this inner loop line at peak times, if necessary
(d) development of somewhat run-down areas of the city centre e.g. Capel St, Parnell St., Aungier St, etc expanding the footprint of the “city centre”
(e) increased demand arising from numbers of apartment dwellers in inner city locations.
(f) moving some suburban bus termini a little further out from the O’Connell St/Quays area - reducing their journey/turnaround times and easing traffic in the most congested central city area.
(g) provision of inner city multi-storey parking slightly removed from the city centre itself

At junction of Stephens Green/Grafton St/South King St a connecting track between Blue and Green Luas lines to allow trams to move from one line to the other as required.
Posted by mollox at 6:45 AM