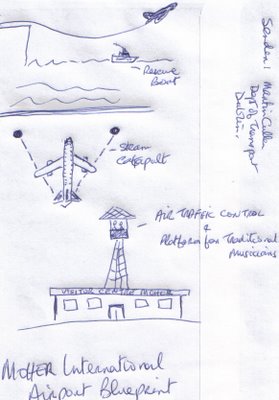 The debate regarding emissions from air travel is hotting up, the latest development being the UK government imposition of a travel tax for all passengers. The phenomenal growth of low-cost carriers such as Ryanair and Easyjet has meant that such emissions are growing at an unprecedented pace, despite the introduction of more fuel-efficient aircraft. There are moves afoot for the EU to introduce similar measures on a Europe-wide basis.

In Ireland, the obligatory Shannon stopover for many transatlantic flights has, for many years, added to aviation pollution, as each take-off consumes a very high proportion of an aircraft’s fuel-load. However, we’re unlikely to see any voluntary change in the stopover regime as the economic benefits to the Mid-West Region far outweigh global environmental concerns, if any, for the Government.

Before the imminent publication of the National Development Plan, perhaps an alternative solution might achieve an acceptable compromise between economic and environmental considerations and could still be provided for in the plan.

Move Shannon Airport to the Cliffs of Moher and, using a catapult system similar to that employed on aircraft carriers, launch aircraft off the cliff top and out over the Atlantic. This should significantly reduce the amount of fuel burned in take-off and thus reduce emissions. The new visitor centre would make a fine terminal building, while the car park is already big enough.
If this all seems a little far fetched, please be assured that it has received as much detailed consideration as many other major Government initiatives e.g. decentralisation.

The difference is that I’m willing to publish my detailed plan (click on image to enlarge) for this innovative proposal, unlike the Government who have refused to show us the back of their envelopes with the detail of Decentralisation, Dublin Metro system etc..