The fate of the man in the white suit? 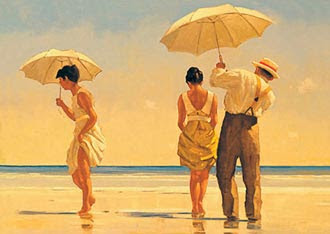 What was that recent event on Sandymount Strand all about, with the Greens prancing about with their umbrellas, led by John Gormley - The Man in the White Suit?

Is it just the Greens mimicing Jack Vettriano - someone (possibly every Green) has one of his posters on the bedroom wall. Believe it or not, this painting is titled "Mad Dogs" - apt or what? Imitation may be the sincerest form of flattery - but this really is "Art Lite".

Or could it be “The Man In The White Suit” a 1951 Ealing Comedy starring Alec Guinness.

Guinness plays Stratton, a researcher working in a textile mill who invents an incredibly strong fibre which repels dirt and never wears out. From its fabric he makes a suit which is brilliant white because it cannot absorb dye. Stratton is lauded as a genius until both management and the trade union realise the consequence of his invention - consumers will only need to purchase once (how many permanently clean white suits would you need?), then demand will drop and put the textile industry out of business. The business owners try to trick Stratton into signing away the rights to his invention but he refuses. Managers and workers try to shut him up, but he escapes.
The climax sees Stratton running through the streets at night in his white suit, pursued by both the managers and the employees. As they close in, the suit begins to fall apart as the chemical structure of the fibre breaks down over time. The mob, realizing that his yarn has a flaw, rips pieces off his suit and he’s left standing in his underwear.

In the current political scenario, John Gormley plays the man in the White Suit. Will history repeat itself? Or has he already signed away his rights to the magic formula?

Or is John Gormley modelling himself on former BBC man Martin Bell, “the man in the white suit”, who ousted disgraced Conservative MP Neil Hamilton in the 1997 UK General election?
Is it an omen that Bell was defeated in the 2001 election (albeit in a different constituency)?

How hard will it be to keep that white suit clean when you’re sitting and supping with the devil? Only time will tell.
Posted by mollox at 1:41 AM