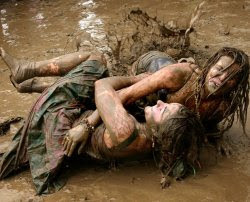 On Saturday last, the Irish Times published this photo of two young women mud-wrestling at Glastonbury on its front page.

Clearly Venus and Mars continue to maintain their independent orbits.

Footnote: Published as a letter in the Irish Times
Posted by mollox at 4:11 PM