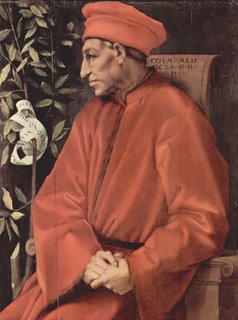 It is now widely recognised that Charles Haughey suffered from chronic Medici Complex.

Having attained the highest public office and greatly enriched himself and his family through its misuse, he then turned his considerable attention to leaving his mark indelibly on posterity.

Although a great admirer of Napoleon, a man of similar physical stature and humble background, Haughey immediately realised that a country of Ireland’s size would never be a major military power. He also recogised that the age of major expansion of national territory through military means was probably over, at least for his generation.

A classic poser, Haughey had also recognised that, both within and without Ireland, writing and other cultural activities are Ireland’s USP (unique selling proposition). A keen fan of Florentine political philosopher Niccolo Machiavelli’s (1469-1527) “The Prince”, which had long been his operating manual for domestic politics, Haughey began to model himself on Cosimo de Medici (1389-1464), the founder of Florence’s Medici dynasty which was a major influence on Machiavelli’s philosophical and political thinking.

Indeed, Haughey may well have been influenced by the contemporary portrait of Cosimo de Medici by Jacopo Pontormo (above). You can see that the likeness is striking. As with all these medieval princes, Haughey believed the first duty of the state was to provide him with financial prosperity and personal ennoblement. The assets of the state were the perosnal assets of the prince, to be used as he saw fit. Having achieved great wealth and the highest political office in the land, CJH then set about, Maslow-style, creating his place in history.

The implementation of Haughey’s strategy to create a long-term historical legacy involved surrounding himself with pompous opinionated pontificators, such as minor poet Anthony Cronin, peppering his speeches with scripted cultural references and quotations, adopting a world-weary aloof demeanour and, most importantly, dispensing largesse to the artistic community, all funded at public rather than his own expense. And, of course, having a cabinet of gombeen gobdaws ensured that he was always a major contrast-gainer in that company.

Thus Aosdana was born, as was the Artist’s Tax Exemption which, in addition to being of benefit to struggling domestic artists, attracted such down-at-heel artists as Freddie Forsyth and Def Leppard to our shores - temporarily at least, until the major portion of royalties had been paid.

Other public monies went on a variety of vanity projects, including Dingle Harbour and Government Buildings. The former ensured him a welcome in the Kingdom even after his public disgrace while the latter was reputedly inspired by a visit to President Mitterand at the Elysee Palace and has become known to dubliners as The Chas Mahal.

It is difficult to convey in words how this complex manifested itself, but it was brilliantly illustrated by RTE's satirical radio programme Scrap Saturday. This regularly featured a sketch in which Haughey is reminiscing about his roots - he's always a descendant of mythic celtic warriors, greek philosophers or roman generals and emperors, why he's even related to the Japanese royal family through Hirohito Haughey.

RTE should replay those extracts as a tribute to the man and also as a wake-up call for all those misty-eyed eejits out there who think you should never speak ill of the dead!
Posted by mollox at 2:27 AM