Last sting of a dying B? 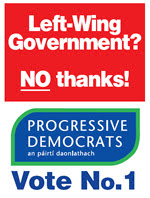 In the run-up to the general election in 2002, with the opinion polls predicting an overall majority for Fianna Fail and wipe-out for the Progressive Democrats, Michael McDowell went up a pole in Ranelagh with a new poster bearing the slogan “One-party Government? NO thanks.”

It was a brilliant political stroke which succeeded in frightening the electorate from letting FF rule alone and it saved the Pds, who not only doubled their seats from 4 to 8, but also ended up as government coalition partners for a second 5-year term.

Now in 2007, all the opinion polls are showing that the combined FF/PD coalition group will not win enough seats to be returned to power on May 24th. Rather, the polls suggest that the alternative Fine Gael/Labour coalition of offer may well win enough seats between them to form a government. With the addition of the Greens, the polls suggest that an alternative government is definitely on the cards.

So today, Michael McDowell tried to repeat the trick with a new scare unveiled at the same lamp post in Ranelagh, illustrated above. His message is that, in an alternative coalition government, Labour leader Pat Rabbitte will be Minister for Finance and McDowell claims this will be a disaster for the economy.

It will be interesting to see what level of traction his attempted “red scare” will achieve. After all, Labour’s Ruairi Quinn was Finance Minister in the last Rainbow Government and demonstrated a degree of fiscal prudence that was widely respected in the business community. However, that was in the period 1994-97 so many younger voters may be unaware of it.

However, it all smacks of the last sting of a dying wasp, or B (as in b*st*rd) in the case of McDowell.
Posted by mollox at 1:32 PM