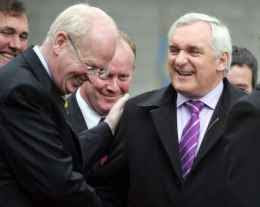 Only last weekend, there was media certainty that McDowell was recommending to his Oireachtas colleagues that the Progressive Democrats pull out of Government with Fianna Fail. It is widely believed that this position was supported by former PD leader Mary Harney. In the event, the PDs decided instead to deliver an ultimatum to Taoiseach Bertie Ahern.

On Sunday, this was done by Michael McDowell at a press conference where, without detailing what new information had arisen regarding the Ahern housing situation of the early 1990s, McDowell laid it on the line for Ahern: if he was to put himself before the people as a suitable candidate for Taoiseach, he had to explain the circumstances surrounding the purchase of the house and certain, seemingly related, foreign exchange transactions.

On Tuesday, McDowell accompanied the Taoiseach to the restoration of the Nortern Ireland Assembly at Stormont and described their meeting as cordial.

On Wednesday, Mary Harney was expressing confidence in Bertie Ahern and looking forward to being back in Government with him after the election. Meanwhile, McDowell was socialising with the Taoiseach at the Arbour Hill ceremony and suggesting that Ahern should be allowed take as much time as he wants to prepare the statement on his personal financial affairs.

So, in the space of just 4 days, the Tanaiste has gone from almost leaving the Government to one where he and his party are attempting to cosy up once again to Fianna Fail.

Do Michael McDowell or the Progressive Democrat Party have any political or ethical credibility left?
Posted by mollox at 1:04 AM